The North Shore Center for the Performing Arts Foundation, a 501(c)3 organization, supports the activities of the North Shore Center for the Performing Arts in Skokie. The Foundation actively seeks funding for the Center’s productions and presentations as well as its physical plant and capital upkeep requirements. The Foundation appropriately stewards funds held for the benefit of the Center, while actively engaging the community for support on the Center’s behalf. Recognizing the cultural depth of the communities that the Center serves, the Foundation seeks to celebrate and highlight diversity in its presentations and operations.

For Current Opportunities to Support the Center, click here!

The Center’s 501(c)3 foundation experienced a recent rebirth with new members joining the foundation board. The reinvigoration of the Foundation has involved a renewed commitment to raise and provide funding for programming that reflects the community the Center serves. The Foundation Board is comprised of civic and business leaders who reach out into the Chicagoland community seeking funding for capital improvements and programmatic excellence at the North Shore Center.

Working in strong partnership with the Center, the Foundation raises funds to ensure that the facility continues to provide the comfort and amenities that are expected at a top-level venue.

The Foundation’s current project involves creating greater access to guests with hearing impairments. Once completed, the telecoil loop installation in the Center Theatre will allow for discreet and convenient hearing assistance to audience members, making it the largest performing arts venue in the area to provide this service. 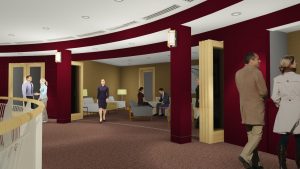 In 2019, a conference room was converted into the Mezzanine Reception Room, open to a view of the main lobby rotunda. This flexible space works to host receptions as well as classes and meetings.

The Center’s commitment to reducing energy and waste is demonstrated in measures such as installing automatic faucets in restrooms and replacing incandescent bulbs with LED lighting. In 2018, the Foundation received an incentive from ComEd to replace cyclorama lighting in the Center Theatre. The new fixtures reduce energy consumption and provide greater functionality than the previous equipment. 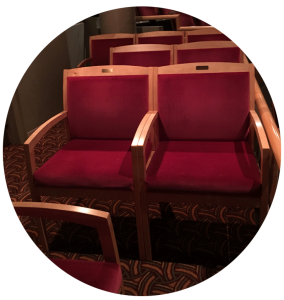 In 2017, the North Shore Center for the Performing Arts Foundation raised funds for the replacement of the accessible seating and box-seat chairs in the Center Theatre.

The Green Room and two Star Dressing Rooms were renovated with new tile work, fixtures, counters, appliances and furniture. With support from the Daniel F. and Ada L. Rice Foundation, Evanston Subaru in Skokie and Lynn & Douglas Steffen, the rooms were overhauled in 2017 and now provide artists with modern accommodations in an updated space. 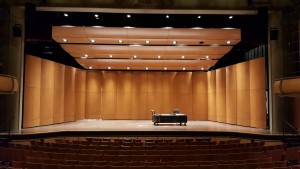 The Foundation launched a campaign to raise funds to replace the Center’s aging orchestra shell. In November of 2015, the Senator Howard W. Carroll Orchestra Shell was installed and dedicated thanks to the generous support of the Centre East Metropolitan Exposition, Auditorium and Office Building Authority, Daniel F. and Ada L. Rice Foundation, Evanston Subaru in Skokie, Crown Family Philanthropies and Christopher B. Galvin Family Foundation. The new orchestra shell not only improves the sound quality for acoustic performances but also compliments the architecture of the auditorium.

Every year, the North Shore Center for the Performing Arts Foundation is instrumental in securing funds for the Center’s education and community outreach programs. The Center is proud to create access by offering hundreds of free and reduced-price tickets for the young people to attend Youtheatre performances. In addition to larger scaled projects, the Center is devoted to providing opportunities for families to attend Feature Series presentations such as Okee Dokee Brothers, Beethoven Lives Upstairs and Rose Revere, Engineer.

With support from the Foundation, the Center proudly hosted the Chicagoland premiere of Chicago-based Classical Kids Live! in collaboration with the Chicago Youth Symphony Orchestra to present Gershwin’s Magic Key in 2018.

In 2017, the Center welcomed the United States Army Jazz Ambassadors Band featuring Chicago Jazz Orchestra for a free public performance thanks to funding from Evanston Subaru in the Skokie. 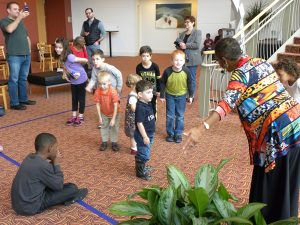 In 2016, the Center celebrated its 20th Anniversary with support from the Daniel F. and Ada L. Rice Foundation, Evanston Subaru in Skokie and the Foundation. A series of events was held to celebrate this milestone with the community. Highlights include a free open house which welcomed guests of all ages for backstage theatre tours, and children’s activities including a Northlight Theatre masterclass, a dance workshop held by Kaleidoscope Dance and Movement Center and an instrument petting zoo hosted by Skokie Valley Symphony Orchestra. Additional outreach included Blues Camp and an evening concert led by Fernando Jones and his colleagues from the Blues Kids Foundation in November.

In 2015, through the leadership of the Foundation, and with the additional financial support of Mellody Hobson, the Center was able to present the Chicagoland premiere of Dar He: The Story of Emmett Till. Dar He was first presented as part of the Coming Together in Skokie and Niles Township “Voices of Race.” Coming Together provides opportunities to explore a different culture each year through attending events, reading selected books, and participating in community discussions. In 2016, Dar He returned to the Center with returning support from Mellody Hobson as well as The Chicago Community Trust and Evanston Subaru in Skokie. The Center proudly continues its relationship with Mike Wiley and presents his work annually.