With the highly anticipated return in June, 2019, Tom Dugan first performed his one man show, Wiesenthal, in October, 2018. In collaboration with the Illinois Holocaust Museum and Education Center, the North Shore Center welcomed several Holocaust survivors to the performance. The play captures the life of Simon Wiesenthal, a Holocaust survivor who dedicated his life to bringing Nazi war criminals to justice. A discussion with Alison Pure-Slovin, the Midwest Regional Director of the Simon Wiesenthal Center, and Dugan followed the October performance.

Chicago-based Classical Kids Live! in collaboration the Chicago Youth Symphony Orchestra returned to the Center on March 17 with Beethoven Lives Upstairs. The Daniel F. and Ada L. Rice Foundation and Evanston Subaru in Skokie supported the presentation and provided more than 100 free tickets for the event. The performance was followed with an instrument petting zoo for children in the Grand Lobby. 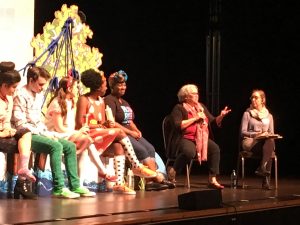 Children’s book author Andrea Beaty joined cast members for a post-show discussion, meet and great, and book signing with young fans after performances of Rosie Revere, Engineer, on November 17, 2018. Beaty, a Chicago resident, has written several books that encourage children to ask questions and explore the natural scientist, mathematician and artist within.

This year marked Center’s first time working with Classical Kids Live! in collaboration with the Chicago Youth Symphony Orchestra to present the area premiers of Gershwin’s Magic Key. Through a generous grant from the Irving M. and Sylvia Footlik Foundation, we were able to provide 150 free tickets to this performance. Outreach activities included live music and an instrument petting zoo after the performance. 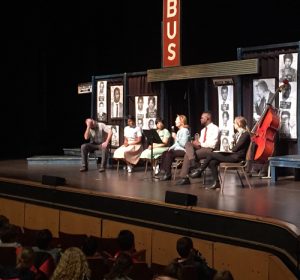 The one-man show by Mike Wiley, A Game Apart provides a glimpse of Jackie Robinson’s life as a star baseball player who was showered with adulation on the field, but who became a second-hand citizen when he walked off the diamond. Jackie Robinson teaches us a powerful lesson of courage during discrimination through the practice of dedication, perseverance and leadership

Coming Together in Skokie &
Niles Township Festival
Opening Ceremony – Celebrating Chinese Culture
Coming Together in Skokie & Niles Township began in 2010 as a program to interact with different cultures in the community by building knowledge, awareness, and appreciation of the diverse residents in the community through literature and special events.

A full house joined us as Skokie & Niles Township kicked off a fascinating three month in depth study of the culture of China as Coming Together presents more than 50 programs, located throughout Niles Township, delving into the history and traditions of China.

Dr. King’s message of walking forward, hand in hand, side by side to create real change remains vital today, perhaps now more than ever. The Chicago Sinfonietta, directed by Mei-Ann Chen, paid homage to Dr. Martin Luther King, Jr.’s vision with the help of young, diverse musicians and singers from across the area, in an intergenerational musical dedication to those that came before us and rally behind those working to make equality and freedom for all a reality still today. Presented in part with support from Evanston Subaru in Skokie. 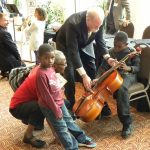 To kick off our 20th Anniversary Celebration, the North Shore Center held a event to welcome guests of all ages. Our free open house featured backstage theatre tours, and children’s activities including storytelling from Linda Gorham, a Northlight Theatre master class, a dance workshop held by Kaleidoscope Dance and Movement Center, and an instrument petting zoo hosted by Skokie Valley Symphony Orchestra.

A performance of enra, a visual dance troupe from Japan that blends stunningly-unique with compelling animation-based live digital performances, was supported by a grant from The Chicago Community Trust. With fewer than a dozen engagements on their US fall tour, and further limited appearances in the Midwest, North Shore Center was proud to bring this special experience to the community.

Blues Camp Day at the North Shore Center was produced by the Blues Kids Foundation under the direction of Fernando Jones. Ensemble groups, of all skills levels, rehearsed Chicago-style blues under the direction of highly-qualified instructors led by Fernando Jones from the Blues Kids Foundation, and then performed a mainstage concert performance in front of a live public audience. This event was sponsored in part by Lynn & Douglass Steffen.

In addition to serving educational needs of young people through our Youtheatre program, some highlights from the 2015-2016 season included bringing in a company from New Zealand, a hip-hop artist from Baltimore and creating an anti-bullying initiative.

Paige Hernandez
Through a grant from the Rice Young People’s Endowment, North Shore Center was proud to host Paige Hernandez. Named a “classroom hero” by Huffington Post and a Kennedy Center Citizen Artist Fellow, she is a multifaceted artist, known for her innovative fusion of poetry, hip hop, dance and education. In addition to Youtheatre performances at the North Shore Center, Hernandez held a workshop with students at Baker Demonstration School in Wilmette.

Anti-Bullying Initiative
With the support of Rotary Club of Skokie Valley, the North Shore Center embraced the opportunity to approach the subject of bullying and cyber bullying in the community. Two presentations in the Youtheatre 2015-2016 season, I am Jack and Out of Bounds, provided educators a story as a framework to facilitate discussions.

Through the generosity of Arts Midwest Touring Fund and New England Foundation for the Arts, North Shore Center held a free public performance in the evening of Out of Bounds for all parents, teachers and students grades 5th grade and up. School District Superintendent Kate Donegan, author and bullying expert Carrie Goldman, and clinical psychologist Hollie Sobel participated in an expert panel discussion after the show.

Young people are vital to the community and North Shore Center. In addition to the in-school workshops and hundreds of free tickets provided to Youtheatre attendees, more than 4,000 young people dance, sing or act on the North Shore Center stages via the numerous dance recitals, school performances and performing arts training programs offered at the Center. Through a partnership with the Skokie Fine Arts Commission, each March the Center’s lobby becomes a welcoming home to art created by children that attend schools in Skokie. The Students’ Outstanding Artist Recognition (SOAR) exhibition culminates in a reception honoring student artists.