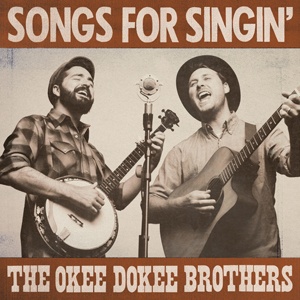 “The Okee Dokee Brothers are an absolute national treasure. These songs are just what the world needs right now.” —Minnesota Parent Magazine

“The lyrics are playful, engaging and subtly filled with life lessons. These are songs that encourage kids to find happiness with fewer material possessions and embrace adventure even in trying situations. Without getting preachy or heavy-handed, Mailander and Lansing come off like happy, kind and fun big brothers eager to show their younger siblings how to have an ethically sound and green-conscious good time.” —Chicago Tribune

Justin Lansing and Joe Mailander have been exploring the outdoors together since they were kids. Now, as the Okee Dokee Brothers, they write songs that encourage kids and families to get outside and get creative.

As the Grammy-winning Okee Dokee Brothers, Justin and Joe have built a plaid-shirted national following with their outdoor adventure-themed albums: Can You Canoe?, Through The Woods, Saddle Up and Winterland. But whether it’s indoors or out, the Okee Dokee Brothers believe that as long as folks are singing together there’s a glimpse of hope for our world. They’ll share old favorites as well as brand new tunes from their latest album, Songs for Singin’ and invite everyone to join the chorus and sing along. “So sing to the sunrise and sing to the moon,” the Brothers say. “Sing with your kids and sing with your neighbors. Sometimes it just takes singing a song with one another to remind us that we’re all family.”