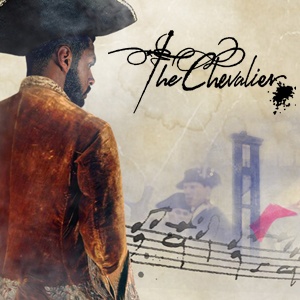 Music of the Baroque presents
The Chevalier

The Chevalier is new concert drama with symphonic music about the first major Black classical composer, Joseph Bologne, Chevalier de Saint-Georges. Audiences discover his true friendships with Wolfgang Amadeus Mozart and Marie Antoinette, and his unknown contribution to the abolishment of slavery.

This is a true story of three immigrants: Marie Antoinette, Mozart, and the Chevalier. A finalist for the National Playwright’s Conference at the Eugene O’Neill Theatre Center, The Chevalier is a meditation on the true nature of equality, conflating the fervor of the French Revolution with the Resistance against authoritarianism unfolding today.

Joseph Bologne, Chevalier de Saint-Georges was a master composer of music, a virtuosic violinist, one of the finest fencers in all of Europe, a military general of Europe’s first Black regiment, and a crusader for equality.  Unfortunately, he was also an extraordinary artist of color nearly forgotten in a white-washed history. His story is bursting to be told—and the time is now.

Son of a slave and French aristocrat, Joseph Bologne reached the top of his game: a music teacher to Marie Antoinette and Europe’s fencer to beat. But when a bedridden Mozart is carried into Bologne’s kitchen, it attracts the attention of a secret police force returning people of color to slavery.  As Paris hurtles toward the Revolution, Bologne is forced to choose between his creative freedom and the crusade for equality. Can he sacrifice his musical bow for his military sword?

The Chevalier – Music Repertoire
A Spotify playlist of the music is streamable HERE.
All music by Joseph Bologne, except where noted.