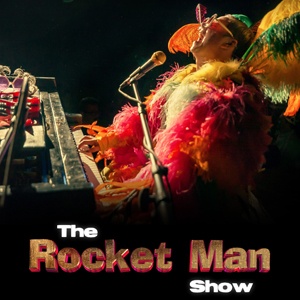 Scotsman Rus Anderson is Elton John’s official body double for his Farewell Yellow Brick Road world tour videos and photos. Hand-picked by Elton John himself, it was Rus’ own live production, The Rocket Man Show which got him noticed.  In the show, Rus recreates the magic and live persona of a young Elton like no other. Storming around the stage with a fun-loving sense of flamboyance; part diva, part soccer player, killer vocalist, fierce piano player, all rock and roller.

Rus’ painstaking attention to detail includes wearing gorgeous, colorful and spectacular costumes (many actually worn by Elton) including his iconic boots, glasses and jumpsuits from 1973, as well as a sparkly Swarovski tuxedo from 1984. It is clearly the most authentic Elton John tribute show in the world.

The Rocket Man Show is a regular feature in US venues, such as House of Blues, Hard Rock Live, Caesar’s, Harrah’s, Legends in Concert, BB King’s, Universal Studios, and Walt Disney World.

Rus and his full band of merry crackerjack musicians are the very best in the business. The show is 100% live in both vocals and instrumentation. Absolutely no tracks or lip-syncing. The performance itself is an extremely sincere, intense and visual spectacle of a journey. There are ballads and driving rock songs. Audiences laugh, cry, sing and dance as they recall the highs and lows of Elton’s epic career.

In summary, the key to success when hiring a band—or even buying a ticket to go and see a band—is knowing how professional they’ll look, act and perform when they arrive. Rus Anderson has been officially hired by Elton John himself to re-enact the most memorable moments of his career. How’s that for peace of mind?

With hundreds & hundreds of shows and satisfied clients, thousands upon thousands of dollars in costumes and a 5-star rating on many of the USA’s elite talent rating platforms, Rus is an ASCAP member, Disney verified and fully licensed and insured.

You are OK with Rus, Elton John thinks so too!
What you see is what you get & that’s entertainment.
See you at the show.

This performance will be part of a benefit event for the North Shore Center for the Performing Arts Foundation.

Join the North Shore Center Foundation Annual Benefit that supports the arts by providing
outstanding educational and community outreach programming.
As a benefit attendee, you will be assigned a prime seat location. Upgrades are available for previously purchased tickets.
Costumes are also welcome.

8:00pm
The Rocket Man Show – A Tribute to Elton John