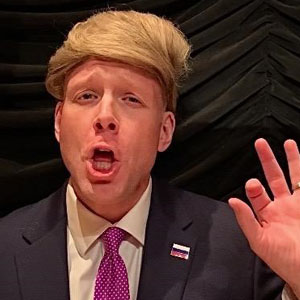 The North Shore Center made the difficult decision to postpone the performances of DC’s Reflecting Fools from Jan 28-30 to April 8-10, 2022. Existing ticket holders DO NOT need to take any immediate action, as existing tickets will be good for rescheduled dates. If those dates do not work for you, we will exchange or provide a full ticket refund. For additional information, please call the North Shore Center Box Office at (847) 673-6300. We are sorry for this inconvenience and greatly appreciate your patronage.

Many touring entertainment organizations that struggled to survive during the pandemic ended up closing shop. It is with a sad heart that we say goodbye to the Capitol Steps and the decades of laughter they brought to audiences.

Please don’t storm the Capitol Steps! The stairway to heavenly political satire originally laid by the Steps continues upward with DC’s Reflecting Fools—the new musical parody group created by the performers and co-writer from the Steps.

After receiving the retirement news, the North Shore Center worked with former co-writer and performers to set the stage for DC’s Reflecting Fools to pick up climbing where the Capitol Steps trailed off. A journey of a million miles begins with one Capitol Step. Let’s welcome some reflection! Join us for the World Premiere performances unveiling the next political movement in comedy sweeping the country.

Like a phoenix rising from the ashes of burned 2020 presidential ballots, DC’s Reflecting Fools hold up a mirror to our crazy political culture, providing hilarious song parodies and “foolish reflections” that continue to inspire your belly-laughter. Audiences will continue to see casts from past seasons performing all the beloved bits, the show-ending and mind-boggling backward talking spoonerisms, break-neck costume changes, over-the-top impressions, and all-new song parodies reflecting the day’s news. Fight your desire to hold the head of democracy under shallow waters, DC’s Reflecting Fools just might get you to laugh a bit.

Jon Bell (performer) Jon is a former member of the Capitol Steps. He has toured with the company for eleven years. Prior to putting on a suit to play Barack Obama, you may have seen him singing and dancing in the rock show Rockin’ Eve’s Wrath, as the lead singer “Wrath,” at Busch Gardens. Jon is so excited to join the new company DC’s Reflecting Fools! He is ready to get back on stage and play again!

Howard Breitbart (Musical Director) Howard works extensively as a musical director, arranger, and collaborative accompanist throughout the Washington DC area. After twenty-seven years with the Capitol Steps, Howard is still trying to maintain composure, dignity, and a steady tempo while his friends in the “Reflecting Fools” attempt to crack him up. *Please note: Howard has nothing to do with the conspiracy-spreading website breitbart.com—or does he…?

Kevin Corbett (performer) After Kevin’s career as a dancer was tragically derailed by the fact that he was a terrible dancer, he turned to a life in comedy. He spent twenty years performing political satire and song parodies with Capitol Steps. Kevin teaches improvisation and comedy to students of all ages at Round House Theatre in Maryland, the National Conservatory of Dramatic Arts in Washington D.C., and various other institutions all across the country. He is currently writing an unauthorized autobiography.

Nancy Dolliver (performer) Nancy toured the country relentlessly with The Capitol Steps for over twenty-five years, portraying such infamous characters as Monica Lewinski, Nancy Pelosi, Hillary Clinton, Barbara Bush, Sarah Palin, and Kellyanne Conway, to name a few. She appeared with The Steps in the 2010 PBS Special, PBS Live at the Rialto. Previous favorite roles included Amy in Company and Fanny Brice in Funny Girl. She also starred in two original productions, as the prolific lyricist Dorothy Fields in Sunny Side of the Street and as her favorite comedienne, Carol Burnett in Laughter at Ten O’Clock. She is proud to be carrying forward the political satire torch with the new DC’s Reflecting Fools and remains undeterred in her desire to offend audience members from both sides of the aisle.

Mark Eaton (head writer) When Mark was approached about a new show, he gave an enthusiastic, “Well, I guess I have nothing better to do.” Mark is hands down the sexiest, most spiritually advanced, and intellectually gifted member of DC’s Reflecting Fools—he also got to write his own bio.

(But he doesn’t take selfies!)

Emily Levey (performer) Emily is a proud native Washingtonian, so you might say that politics and/or poking fun at politicians runs in her blood (aren’t they kind of the same thing, after all?). Emily has performed at theaters all over the Washington DC area, including a glorious five years with the Capitol Steps. She is overjoyed to continue the tradition of laughing at the ridiculous state of things with the DC’s Reflecting Fools.

Jack Rowles (performer) Jack is thrilled to be back on stage Reflecting the Fools that occupy the offices on Capitol Hill. After twenty years of performing with The Capitol Steps, Jack is looking forward to resurrecting some of his favorite characters, including but not limited to, Putin, Bernie, Bannon, Blagojevich, and the Pope!