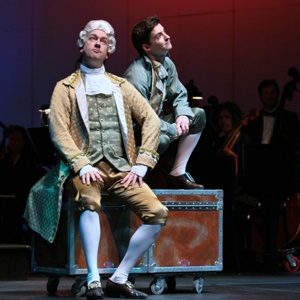 Based on the highly acclaimed and award-winning recordings of Mozart’s Magnificent Voyage and Mozart’s Magic Fantasy, this theatrical symphony concert is an imaginative way to introduce young audiences and their families to the life and music of Wolfgang Amadeus Mozart in a live performance venue.

Audiences will enjoy over twenty excerpts from some of Mozart’s most famous pieces as they magically weave in and out of the drama, including themes from The Marriage of Figaro and Don Giovanni, popular selections from The Magic Flute, and some of his most important and engaging works such as Ave Verum, Symphony No. 1, Clarinet Quintet, and Eine Kleine Nachtmusik.

Mozart’s Magnificent Voyage is approximately fifty minutes in length and recommended for audiences aged six and up.

In the story, Mozart’s young son Karl is furious at the prospect of returning to his boarding school, a place where he feels isolated from the excitement of the world and neglected by his family. As father and son sit by the side of the road waiting for a carriage that will return Karl to school, tales from Wolfgang’s childhood reveal that they have more in common than they could have imagined. Karl and his father relive young Wolfgang’s prodigious adventures, from meeting of the Queen of England, to the wonder of the Sistine Chapel, to celebrating Carnivale!

But that’s not all! Karl discovers the great master’s passion for composing as they embark on a magic journey into the world of The Magic Flute, joining the Prince and Papageno on their quest to rescue Princess Pamina from Sarastro’s enchanted castle! The adventure culminates in Wolfgang agreeing to allow Karl to attend a performance of The Magic Flute, and ultimately to stay home with the family and continue his schooling in Vienna.

♫ “Far and away the best for introducing children to classical music!”
— Boston Herald

♫ “One of the most completely wondrous examples of children’s entertainment ever!”
— Billboard

♫ “The best way to unlock the mind and heart of a child to the wonders of musical masterpieces!”
— New York Daily News

Classical Kids LIVE! is produced by Classical Kids Music Education, a Chicago-based non-profit organization that works to enrich communities through direct access to culturally significant venues, professional artists and organizations, and high-quality theatrical concert productions, while fostering new appreciation for classical music and music history. Classical Kids has collaborated with hundreds of professional orchestras presenting over a thousand performances to over two million children (and adults) throughout North America and around the world. These highly acclaimed concerts, designed to bring to life the extraordinary lives and musical masterpieces of the great composers, are hailed as one of the best ways to introduce children to symphonic music.

Classical Kids Music Education is funded in part by

Chicago Youth Symphony Orchestras’ mission is to inspire and cultivate personal excellence through music. After 75 years of music-making, CYSO continues to shape generations of young leaders and musicians. Students collaborate and create in a learning environment like no other, developing fundamental skills including leadership, self-confidence, teamwork, and resilience. We are committed to educating, encouraging, and empowering each young musician so that they may pursue personal excellence both on and off stage.