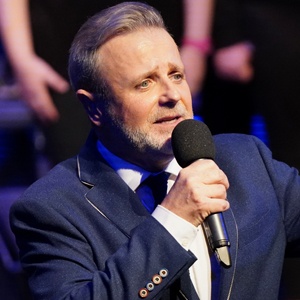 Ireland with Michael is a wonderful new Celtic show filmed live in June 2019 at the National Opera House in Wexford, Ireland. This exclusive and never-before-seen concert was taped in front of a live audience and features the Irish Concert Orchestra; two choirs; and singers, musicians and dancers from all over Ireland. These talented artists join renowned Irish singer Michael Londra in a celebration of Irish culture, heritage and music for Saint Patrick’s season.

Emmy-nominated, Irish singer and producer, Michael Londra is from the opera capital of Ireland, a small town on the South East coast called Wexford. He decided in his early thirties to follow his heart and pursue a professional singing career. His leap of faith was rewarded when he soon became a leading man in musical theater in Dublin playing many roles. The US director and choreographer, Larry Fuller asked Michael to play Bobby Kennedy in the world premiere of JFK where he was noticed by the producers of Riverdance.

He was offered the role of lead singer in the US National Tour of Riverdance which included performances at Radio City Music Hall and the MGM Grand in Las Vegas. In March 2000, Michael again was offered the position of lead singer in the new production of Riverdance on Broadway, taking the role from acclaimed Irish singer Brian Kennedy. This was the platform from which Michael’s recording and producing career began.

Michael’s first album Celt was produced by acclaimed producer Steve Skinner who co-produced the Grammy nominated soundtrack of RENT. He has worked as an arranger/co-producer for Bette Midler and Celine Dion and has collaborated many times with Arif Mardin, producer of Norah Jones’ acclaimed CD. The album was released in fifteen countries worldwide selling particularly well in Korea where it reached No. 1 in the World Music Charts.

Michael’s recording of “Danny Boy” was described by The Irish Emigrant in New York as “One of the best recordings of Danny Boy in history.” The Youtube video of this recording has been downloaded by over 8 million people.

He performed with Judy Collins at the JFK 50 Events in Ireland in 2013 attended by the Kennedy family and was invited to sing at the graveside of President John F. Kennedy in a ceremony to honor the event.

In 2004, Michael was chosen for the role of Jesus in The Passion of the Christ Symphony. This production was based on the score of Oscar nominee John Debney and had its US premiere in Hollywood on September 11, 2005.

His PBS special, Beyond Celtic which he co-produced with Mindfox Productions, was taped in March 2011 airing nationally over 400 times. In April 2012 he signed a publishing deal with Shapiro Bernstein. The TV special earned two Emmy Award nominations.

Michael’s work with partner Jean Clancy on the Celtic Woman project created by Sharon Browne was a turning point in Michael’s career offstage. He has been involved in many productions around the world as an artistic director and producer. He toured Dance of Desire in China and worked with Harmony Artists to bring Caution: Men at Work and The Spirit of Christmas show to Asia.

He has recently formed a partnership with CEO of Venuworks, Steve Peters. The company, Venuworks Theatricals, is producing a new musical this year in Ireland, written by world renowned children’s author Eoin Colfer and film composer Liam Bates. The premier National US tour debuted in 2018 touring twenty-five cities. There are plans for a European production in 2019. The company is developing several new musicals.

He created Radiocelt.com in Chicago in 2003 which is part of the Accuradio network (one of the top ten internet radio stations in the world). In addition, Michael has been very active in yet another role, this time as an ambassador for “Concern Worldwide“. Through several CD releases and through his high-profile visits to Haiti, Michael has raised considerable awareness for the charity and helped bring the issue of poverty and hunger to the attention of the public. He is an advocate in North America for the Visit Wexford campaign and was made a Wexford Ambassador in 2012 along with Booker Prize winner John Banville, Colm Toibin, Eoin Colfer, X Factor host Dermot O Leary and boxing legend Billy Walsh.

In 2013, Michael became a mentor for Grammy University teaching music business students from Vanderbilt and Belmont Universities in Nashville.