Thank you for your interest in this special free event.
We had an overwhelming response and, therefore, have had to close reservations.
If you are not on our email list, be sure to sign up so you can be made aware of these events in the future. 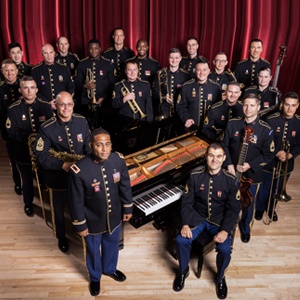 The Jazz Ambassadors is the official touring big band of the United States Army. Formed in 1969, this 19-member ensemble has received great acclaim at home and abroad performing America’s greatest original art form, jazz. Concerts by the Jazz Ambassadors are programmed to entertain all types of audiences. The band’s diverse repertoire includes big band swing, bebop, Latin, contemporary jazz, standards, popular tunes, Dixieland, vocals, and patriotic selections, many of which are written or arranged by members of the Jazz Ambassadors. The Jazz Ambassadors has appeared in all 50 states, Canada, Mexico, Japan, India, and throughout Europe. Recent notable performances include concerts at the Toronto Jazz Festival, the Richmond Jazz Festival at Maymont, the Kennedy Center Honors, the Jazz Education Network Conference, and an appearance on The Colbert Report. Gordon Goodwin, Bobby Shew, Ernie Watts, and the Dave Brubeck All-Star Quintet are just a few of the outstanding jazz artists who have shared the stage with the Jazz Ambassadors. The band has been featured in joint concerts with Marvin Hamlisch and the Pittsburgh Symphony Orchestra, the San Diego Symphony Orchestra, the Seattle Symphony Pops, the Colorado Pops Orchestra, and the New York Pops at Carnegie Hall. The band’s rigorous touring schedule and reputation for excellence has earned it the title “America’s Big Band.”

“What a great band! I can’t imagine better ambassadors for our country.”
Marvin Hamlisch, Composer and Conductor

Remember that a reservation does NOT guarantee a seat for the concert. If you made a reservation, please review the email you received as that will represent your ticket(s) for this FREE general admission concert event and you will need to present it to be admitted to the theatre the night of the performance. All ticketholders must arrive at least 15 minutes prior to the concert to be seated. 10 minutes prior to the concert, empty seats unclaimed or due to late comers will be immediately released to non-ticket holders.