The Film Music of John Williams 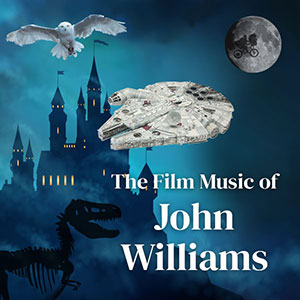 The Film Music of John Williams features music from: E.T. the Extra Terrestrial, Jaws, Harry Potter, Schindler’s List, Far and Away, The Adventures of Tintin, and many more of his well-loved movie scores.

John Williams is the most celebrated composer of film scores. His compositions are iconic and immediately recognizable. Just a few notes can take you on a journey worlds away, through history, time and space. A legend in our time, the 89-year-old maestro has had 52 Oscar nominations – second only to Walt Disney – and has taken home five. He has won 25 Grammy Awards.

The Elgin Symphony Orchestra is one of the preeminent regional orchestras in the United States. Since its founding in 1950, the organization has developed a reputation for artistic excellence, innovative programming, and a deep commitment to the social advocacy and economic development of the diverse communities that it serves.