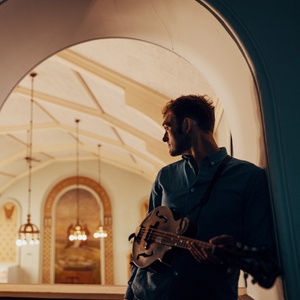 MacArthur Fellow and Grammy Award-winning mandolinist, singer, songwriter Chris Thile, who the Guardian calls “that rare being: an all-round musician who can settle into any style, from bluegrass to classical,” and NPR calls a “genre-defying musical genius,” is a founding member of the critically acclaimed bands Punch Brothers and Nickel Creek. For four years, Thile hosted public radio favorite Live from Here with Chris Thile (formerly known as A Prairie Home Companion). With his broad outlook, Thile creates a distinctly American canon and a new musical aesthetic for performers and audiences alike, giving the listener “one joyous arc, with the linear melody and vertical harmony blurring into a single web of gossamer beauty” (New York Times).

Most recently, Chris recorded Laysongs, out June 4, 2021 on Nonesuch. The album is his first truly solo album: just Thile, his voice, and his mandolin, on new recordings of six original songs and three covers, all of which contextualize and banter with his ideas about spirituality. Recorded in a converted upstate New York church during the pandemic, Laysongs’ centerpiece is the three-part “Salt (in the Wounds) of the Earth,” which was inspired by C.S. Lewis’s The Screwtape Letters. The album also features a song Thile wrote about Dionysus; a performance of the fourth movement of Béla Bartók’s Sonata for Solo Violin; “God Is Alive, Magic Is Afoot” based on Buffy Sainte-Marie’s adaptation of a Leonard Cohen poem; a cover of bluegrass legend Hazel Dickens’ “Won’t You Come and Sing for Me,” and “Ecclesiastes 2:24,” original instrumental loosely modeled after the Prelude from J.S. Bach’s Partita for Solo Violin in E Major.

“That rare being: an all-round musician who can settle into any style, from bluegrass to classical.”
—The Guardian

Chris Thile’s Laysongs is his first truly solo album: It’s just Thile, his voice, and his mandolin, on a set of nine new tracks, combining original songs with three wisely chosen covers that contextualize and banter with his ideas. While Thile’s critically lauded interpretations of Bach on mandolin (2013’s Bach: Sonatas and Partitas, Vol. 1) also showcased him on his own, that was a kind of duet, a dialogue between Thile and his beloved J.S. Bach. Laysongs, on the other hand, is more of a soliloquy, and it’s very much a soul-searching one. Thile confronts, cajoles, and cozies up to his personal—and our shared—angels and demons, an effort made more poignant, dramatic, and universal by the enforced isolation of the pandemic.

At the heart of the album is a three-part piece, “Salt (in the Wounds) of the Earth,” that Thile premiered during a fall 2018 composer’s residency at Carnegie Hall. It was, he’s noted, “the first (and so far only) music I’ve made specifically to perform alone, which felt like an opportunity to sing some words that it wouldn’t necessarily be fair to put in a collaborator’s mouth.” Little did Thile know he was merely at the start of what would become a solitary adventure, professionally and, lord knows, philosophically.

Thile had been inspired to write “Salt” after revisiting C.S. Lewis’s The Screwtape Letters—a satirical collection of letters from a senior demon to his apprentice—during a long-haul plane trip. The novel cleverly addresses temptation and the undermining of faith. In each movement of “Salt,” Thile plays a variation on a devil’s advocate, nurturing superiority complexes in believers and non-believers alike, with a targeted spiritual disinformation campaign. Thile’s performance is broad and full of mischief, and his playing is just as lively, but there’s a gravity to the questions he poses that lays the foundation for the rest of Laysongs.

Thile played part one of “Salt” during a December 2018 episode of his public radio show, Live from Here, broadcast from Manhattan’s The Town Hall. It was a memorable installment that also featured Thile and his stellar house band performing Randy Newman’s “God’s Song” and Regina Spektor’s “Laughing With.” Thile had built the evening around questions of faith, or the lack thereof, responding to the mixed spiritual and secular messages he’d been encountering on the streets of New York City during the holiday season.

Nonesuch Chairman Emeritus Robert Hurwitz was in attendance and, afterwards, he came backstage to encourage Thile to elaborate further on these ruminations. He saw the makings of an album that could tap into Thile’s own experiences of being raised in a Christian household, an early life that Thile regards with equanimity, not rancor. As he explains, “Bob said, ‘Man, you should do a God-themed record of some kind, it’s all over your work. I was touched that Bob had that suggestion. It is a lifelong obsession of mine, even post-Christianity, what the impact of that kind of devotion to any organized religion is, the extent to which it can be a force for good or for bad. It has probably woven itself though all the work I’ve ever made. And it’s true of so many of the people I make music with, who grew up singing in church—starting with Sean and Sara Watkins [his Nickel Creek bandmates].”

Throughout 2019, however, Thile had to keep his traveling radio show rolling. It wasn’t until the world went into COVID lockdown in the spring of 2020 and Live from Here ended its run that he seriously began to contemplate this idea. Again, Hurwitz supplied a nudge, encouraging him to “‘make a snapshot of your experience of the pandemic.’” Soul-searching was becoming, for many, a daily routine: “I was coming out of the most intense creative period of my life, when all of a sudden, for the first time in a long time, I had a moment to think and dream a little—and I wondered, ‘If I made something, what would it be?’”

With Laysongs, Thile had to explore that question, of necessity, completely on his own, which somehow seems fitting: What better way to wrestle with one’s thoughts? Metaphorical isolation had become all too real. But Thile, as a songwriter and performer, is an amiable agnostic, even in these trying times. Rather than weighing him down, this period in the epistemological wilderness has lifted him up.

Thile takes a playfully discursive path on this journey toward earthbound salvation. He allows the listener to connect the dots along the way, to figure out how a song about Dionysus, for example, or a virtuosic performance of the fourth movement of Béla Bartók’s Sonata for Solo Violin, may fit into his plan. “Ecclesiastes 2:24” has no lyrics and may require a brief visit to the Old Testament to see what Thile has up his sleeve. He does offer a clue: “Ecclesiastes 2:24 is one of the bible verses that resonates most with me. It’s good for a person to eat and drink and take satisfaction in their work. And it foreshadows ‘Dionysus.’ “

“God Is Alive, Magic Is Afoot” is based on Buffy Sainte-Marie’s psychedelic adaptation of a Leonard Cohen poem from her 1969 album, Illuminations. Thile discovered it while researching Sainte-Marie for a Live from Here birthday tribute. He honors its incantatory spirit before launching into the intense and at times rollicking “Salt (in the Wounds) of the Earth.” He says, “Covering other people’s material is an opportunity to jam or have a soirée with the likes of Leonard Cohen, Buffy Sainte-Marie, Hazel Dickens, and Béla Bartók. It was important to me to interact with other artist’s perspectives on this topic while I explored it.”

Though Thile often performs works from the classical canon, including his aforementioned forays into Bach an arrangement of the Passepied from Claude Debussy’s “Suite Bergamasque” with his fellow Punch Brothers (on The Phosphorescent Blues), he’d never approached Bartók, whose work he calls “the biggest influence on me that I hadn’t yet attempted to perform.” But Thile found the perfect—and perfectly provocative—spot for Bartok’s sonata on Laysongs. As he says: “It’s the furthest afield from the theme, but there is something so infernal about it. After ‘Salt (in the Wounds) of the Earth,’ one might expect something light, some sort of exhale. Instead, we launch immediately into the fourth movement of the Bartók. It’s as if one of the demons in ‘Salt’ stole my mandolin and started playing.”

Thile had the makings of an album, it turned out, well before he embarked on the actual recording of it. All it took was tying together these various threads from his writing and his research. Helping him put it together was his wife, the accomplished actor Claire Coffee, who’d long been his unofficial sounding board and now serves as his co-producer: “I’ve leaned on Claire’s opinions ever since we met. She has incredible taste and narrative intuition. She was able to help me weave the original and non-original material together into what you’re hearing.”

By the summer of 2020, Thile, Coffee, and their son Calvin had relocated to a rental house in Hudson, NY, a haven for urban expats, as they waited for pandemic-delayed renovations to be completed on their Brooklyn home. In what might have been a bit of divine intervention, they found a recording studio, Future-Past, that was housed in an old church right in the center of town.

“I went in there to look at the space and instantly felt so at home,” Thile recalls. “I loved the amount of sound around the sound. I had two sonic collaborators on this record: the tremendous engineer Jody Elff and that church.”

He continues, “It was so easy for me to stay in character because of where we were. Every hour or so I would take a stroll around the church and let the stained-glass windows transport me back to the last church I attended regularly, Grace Cathedral at the top of Nob Hill in San Francisco.”

Thile realizes—and illustrates in these songs—that the greatest spiritual sustenance comes from communion with others, in breaking bread, sharing wine, and, above all, singing together. The final track on Laysongs, a cover of bluegrass legend Hazel Dickens’ “Won’t You Come Sing for Me,” serves as secular recessional hymn. As he notes, “There is no worship of a deity in that song; it’s very much a plea to your close friends, a plea for fellowship.”

By summer 2020, Thile reveals, “I was more than ever before craving that thing—singing with people, making music with people, but particularly that very selfless kind of music making that happens in church. At best you aren’t thinking about yourself or even about the people you’re making music with. You’re all just doing it together and it’s about something else. It’s really beautiful. And it’s maybe the only thing about organized religion that I miss.”